The Future of Securities on Blockchain 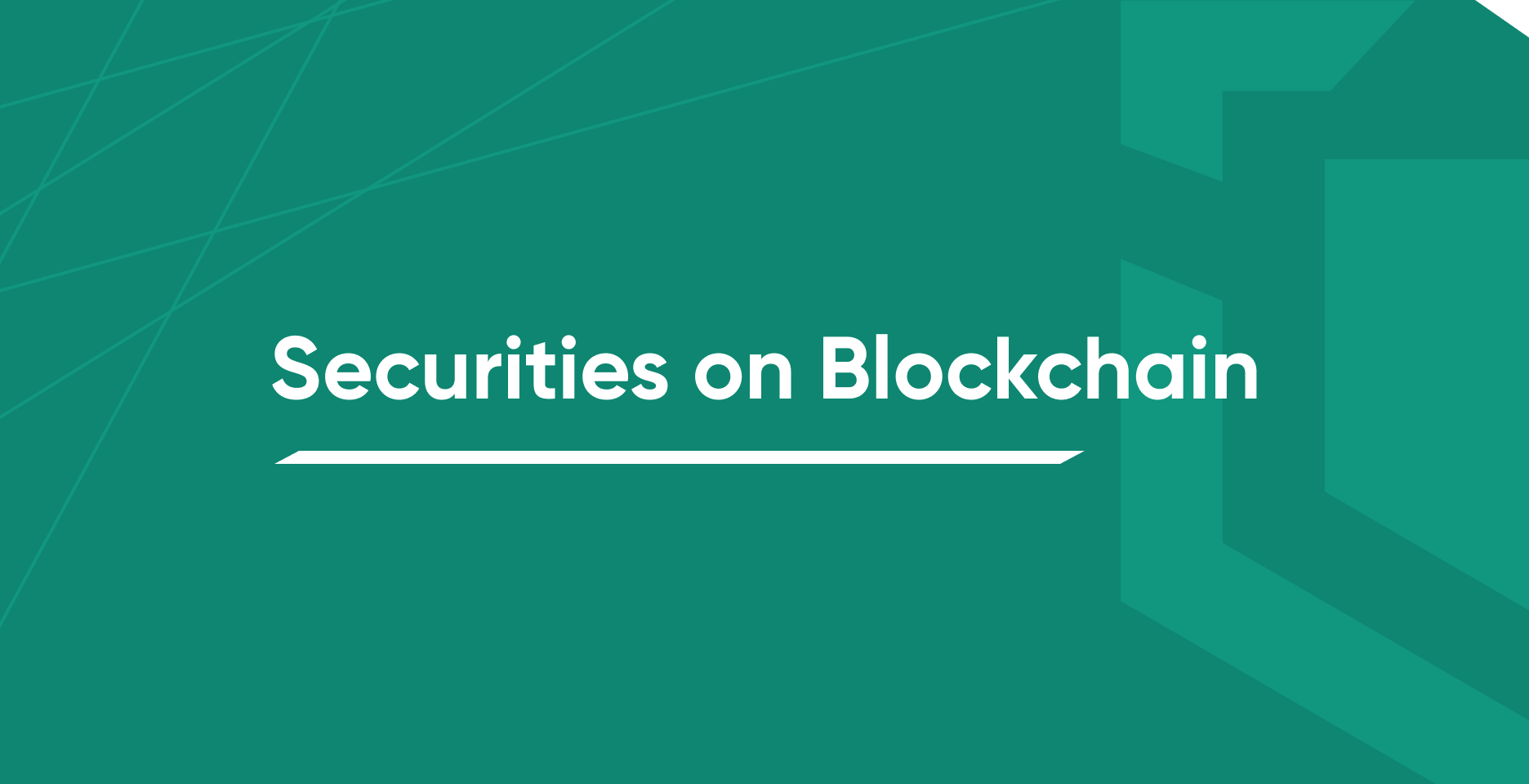 The DeFi hype of 2020 is reminiscent of the ICO bubble of 2017-18. Rewind back a couple of years, when projects were popping up left and right, using blockchain technology to solve all that is wrong in the world.

It started with cautious optimism, with projects like Ethereum and Neo (or Antshares, as it was called back then) exploring the capabilities of a nascent technology, adding their own innovations to enrich its value. Ethereum gave the world the idea of writing programs on blockchain using smart contracts, and Neo showed us the capability of Proof of Stake consensus by implementing it in a large scale blockchain (Peercoin had tried it earlier, but with limited success).

Ethereum and Neo introduced the novelties of blockchain technology, such as immutability, decentralization, and exclusive ownership of assets issued on the blockchain. Both these projects are backed by a skilled team of developers, enjoy strong community support, and continue to be used by DApp developers to this day.

With increased adoption, people started using blockchain for transferring value (monetary funds) to different corners of the world, almost free of charge and instantly, bypassing the red tape, the hefty transaction fee and the delay associated with banks. This opened up a world of opportunities to people who didn’t have access to traditional banking or financial means.

But All’s Not Well in the Blockchain World

Unfortunately, just a handful of projects have managed to live up to the promises that they made in their whitepapers. Following the success of the initial enterprises, a mad rush ensued towards the end of 2017. A host of projects tried to leverage either on blockchain technology, or simply the term “blockchain” in their website. Some of them were driven by good intentions; others, not so much.

The market hype, the spiralling value of Bitcoin, and the investor greed all combined to help blockchain projects reach unrealistic valuations, even without a single working product in the market! Of course, some of these projects were money-grabbing schemes to begin with – anonymous teams, quickly putting together a website and whitepaper, raising millions of dollars, and then vanishing without a trace!

What came as an unpleasant surprise is that even most of the legitimate projects failed to live up to the expectations. And as was bound to happen, the entire crypto market collapsed, dragging down all these startups with them. Investors even started blaming the ICOs for dumping the funds they had raised and setting in motion the bear market!

The Pitfall of Utility Tokens

Most of the blockchain projects issued what’s known as Utility Tokens. As the name suggests, these tokens have value (or ‘utility’) within the ecosystem of the project. For example, a user can use them to pay for availing a service or purchasing a product offered by the enterprise. Even in theory, the token price has no relation at all with how well or how badly the token issuing company is performing.

Token value was mainly fuelled by speculation as to how ‘precious’ they might become in the future. Ordinary investors with little technical knowledge about blockchain, or the skills required to evaluate the personnel behind the project, were allured by the hype and the prospect of making quick profits. Unfortunately, when a project didn’t follow what was promised, its token depreciated both in price and reputation, resulting in the investors getting scammed. And this happened over and over!

The Rise of Security Tokens

There had always been contention among the authorities whether the tokens being sold to the public were mere utilities, or whether they granted the token holders the right to share any profit the company was making. With blockchain companies raising millions of dollars through their ICOs, the concept of Security Tokens was formally introduced.

Just like a traditional security (such as a share or a bond) represents (partial) ownership position in an enterprise, a security token represents a digitized representation of ownership of the token issuing company, making the token holder its stakeholder.

Furthermore, unlike utility tokens, security tokens represent assets which are already present in the real world, acting as a bridge between legacy finance and blockchain. This brings them under the purview of federal regulations like their traditional counterparts.

Traditional financial institutions usually involve a network of middlemen between the buyer and the seller. Security tokens completely remove the need for middlemen, completely cutting out all the paperwork, services charges and undue bureaucracy that comes with it. This is the biggest advantage of security tokens. Tokenized shares, dividends and even debts can utilize the benefits of blockchain and prevent investors from the downsides.

For business owners, issuing securities on blockchain is much cheaper and has a much lower barrier of entry than launching an IPO. This is especially helpful for smaller companies looking for investors’ funds to bring to fruition their business ideas.

Moreover, since these transactions are governed by smart contracts, they are completely outside the jurisdiction of banks and are not subject to cross-border restrictions. For example, an investor in China can easily purchase (or sell) security tokens of a company based in the United States from a cryptocurrency exchange. Purchasing stocks of the same company would have been a quagmire of legal and financial complications. Both founders and investors benefit from increased liquidity through security tokens.

So, are Security Tokens the Holy Grail of Crypto?

Security tokens connect enterprises directly with investors from different corners of the world. Transactions are finalized at extremely low fees, within the blink of a block confirmation time.

However, this comes at a cost. The company issuing the security tokens must follow the law of the land in which it is based, otherwise it might find itself at the receiving end of lawsuits and penalties! This introduces some unique complications, even when the company is perfectly willing to follow all regulations.

The primary hindrance is that many countries have not yet provided clearly defined regulatory framework when it comes to cryptocurrencies. This leads to legal ambiguity as to what exactly is a security token, or how can it be regulated. Even in the United States, the SEC (Securities & Exchange Commission) is still in the process of defining a complete set of guidelines which issuers and investors can use to determine whether digital assets are securities.

To add to that, cryptocurrency exchanges can never be too sure if a company has adhered to all the necessary regulations while issuing the (security) token. This makes them reluctant when it comes to listing such tokens, as any such irregularity might also land them in trouble.

In some cases, given the lack of clarity as to what exactly constitutes a security token, exchanges are unwilling to list any token that might resemble securities in any aspect. Not only does this reduce the token liquidity, but it also prevents widespread adoption, which can end up being a roadblock in the development of the project.

How Mintlayer Solves this Problem

Mintlayer opens up a world of opportunities to developers who wish to issue security tokens while being fully compliant with legal restraints. The inherent problems associated with security tokens are solved through Mintlayer’s protocol in three parts.

First of all, the founding company of Mintlayer is cooperating with San Marino to create a regulatory compliant framework for all EU companies that want to issue tokens on Mintlayer. This would empower anyone who follows clear guidelines to create tokens that can operate while adhering to regulations without a hassle.

Secondly, token issuers on Mintlayer’s protocol are given the option to select whether a token they create is a security, and define other parameters for the token, including the Access-Control-List (ACL). This will allow only wallets whose identities are verified by decentralized identifiers (DID) to buy or sell security tokens. Issuers will have the flexibility of implementing other sophisticated constraints as well, depending on the specific use case.

Finally, Mintlayer will implement a built-in DEX accessible directly from the user wallets, which will have a separate section for security tokens. Security tokens with ACL would require users to verify their DID before they can purchase or sell those tokens. For other tokens, users would be able to trade or transfer them without any restriction.

This built-in access control would ensure that users trade security tokens in a fully compliant way. Tokens can be issued in a country while complying with its regulatory framework, and then traded in a DEX accessible to users all over the world. This would have been impossible with only centralized solutions. Token issuers can enjoy increased liquidity, without being dependent on centralised exchange listings.

Mintlayer is introducing the power of DeFi to Bitcoin, through an open and specialized protocol developed as a sidechain on Bitcoin’s blockchain. Users would now be able to access DeFi applications and decentralized exchanges, simply by holding Bitcoin in their wallets. Mintlayer’s protocol also makes it possible to issue wrapped versions of different cryptocurrencies on Mintlayer’s blockchain (while locking the tokens in their native blockchain). This enables users to store multiple cryptocurrencies in a single wallet, and send them together in a single transaction.

To stay updated with the latest developments of Mintlayer, check out our community page and stay connected with us on Twitter and Telegram.